O Loveliness Supreme, and Beauty Infinite;
O ever flowing Stream. And Ocean of Delight;
O Life by which I live, my truest life above,
To Thee alone I give my undivided love.   Hymn by St Alphonsus

During the fourth watch of the night, Jesus came toward them, walking on the sea.  When the disciples saw him walking on the sea they were terrified. “It is a ghost,” they said, and they cried out in fear.  At once Jesus spoke to them, “Take courage, it is I, do not be afraid.” Peter said to him in reply, “Lord, if it is you, command me to come to you on the water.” He said, “Come.” Peter got out of the boat and began to walk on the water toward Jesus. But when he saw how strong the wind was he became frightened; and, beginning to sink, he cried out, “Lord, save me!”  Immediately Jesus stretched out his hand and caught him, and said to him, “O you of little faith, why did you doubt?”  After they got into the boat, the wind died down. Those who were in the boat did him homage, saying, “Truly, you are the Son of God.”   MT 14 25-33 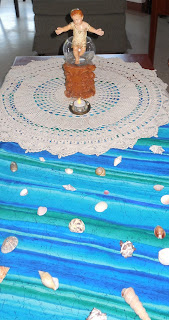 The Rio Olympics have come to a close.  Over the past two weeks we were inspired by the dedication, courage and graciousness of the Olympians who mesmerized us with their skill. And on the nightly news we were also stirred by the sight of the majestic statue of Christ the Redeemer overlooking the bay below.

During the summer, or when on retreat, people often like to go to the seashore.  There is something majestic, mesmerizing, mysterious about the vast expanse of water that makes us feel insignificant, yet full of a wonder that is akin to our relationship to God.  We want to dive in but we hesitate.  It is too big for us.  Yet we are drawn to it.  We only have to summon our faith and have courage to become one with the Mystery.

Peter is a good example of how this is done because actually, Peter jumped into the sea twice to be closer to Jesus.  The first time, as we just read, was when the disciples saw Jesus walking on the water during a stormy night and Jesus bade Peter come to him. Peter moved timidly and was chided for his lack of faith when he sank in the water.   The other occasion was at dawn a few days after the resurrection and Jesus was on the seashore preparing breakfast. That time, Peter did not wait for an invitation - he jumped right in.  Neither time did Peter walk on water.   But the second time he felt no fear or limitation, just a longing for union with Jesus. 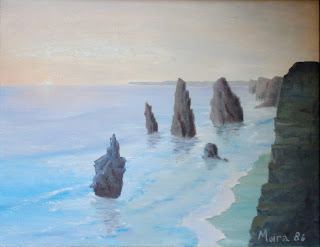 That describes what Bl. Celeste wrote of her experience of union with Jesus:  “You have shown me how you are that most vast sea of perfect and infinite Good and how I am like a drop of water which falls into you and is changed in that vast sea, where, losing my own being, I see myself become an ocean of every kind of good. Consequently, losing any sense of my own limited being and of my littleness, I now feel myself to be a new being, vast and divine, in which I feel no more fear or the limitation of time. Indeed, in this new state I am like a force, a power, an infinite greatness and an unlimited goodness.”

Like Peter, like Celeste, like Alphonsus, like the Olympians, let us dive into the Ocean of Delight by letting go of our fears and be transformed into a new being in union with Christ: a fearless force of unlimited goodness that is as vast as the sea.
Posted by Redemptoristine Associates at 10:23 AM