HOMILY ON THE FEAST OF BLESSED CELESTE CROSTAROSA by Fr. Tom Orian 9/11

‘We heard in the Paul’s letter to the Ephesians these words, “we are God’s work of art, created in Christ to do the good things God created for us to do and today the Church celebrates one of God’s masterpieces, Blessed Maria Celeste Crostarosa.   To many however, when you mention her name the response is not one of great joy but more one like Who?  To the small band of her followers in this room she is model, guide and companion even centuries later.

Paul further says we exist to display the immeasurable riches of God’s grace and kindness in Christ and the gift of faith given to us in Christ . This is what saints do and it was what Blessed Celeste did in her life. Like Martha in the Gospel came to do, she was also able to come to believe that Christ was the Messiah and Son of God who had come into the world to save us.  Her world was a special world just as Martha and Mary’s world was, she knew and believed that in Christ Jesus, “whatever you ask of God, God will give you.”

Giulia Crostarosa was born in Naples in 1696, the 10th of 12 children. She was considered by some as the “darling of the family” both intelligent and high spirited.  There was much to be discovered about her as she grew in her understanding of who she was.  She invites us this day on here Feast day to continue to grow in our understanding of who we are as a people of God.
When you want to understand something about a founder such as Celeste you look to her writings, Her writing was so focused on the one who was the redeemer of humankind and thus we have a community who recall and who contemplate as only they can, the one redeemer’s actions for us today and every day, Celeste heard Jesus’ command when he said to her and he says to us. “Do not love any creature, love only me. Imitate my life and unite whatever you do with the works of my life.”   Blessed Celeste went about with eyes focus and heart dwelling in the life of Christ her teacher and redeemer. 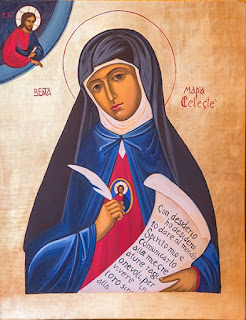 She, as many young women did in her day and age, entered religious life and when while still in formation as a novice, she had a revelation that she would be the instrument by which a new rule and order of nuns would be established. She wrote “With desire I have desired to give my Spirit to the world and to communicate it to my creatures endowed with reason, in order to live with them and in them until the end of the world. Out of immense love, I have given them my Only Begotten Son.”

With the support and collaboration of St. Alphonsus Liguori, who later became her friend the Order of the Most Holy Redeemer was founded on the Feast of Pentecost in 1731. That is the beginning of the story but it certainly doesn’t end there. Like many founders of new communities she was misjudged, she was called a troublemaker, delusional, and to even some she was considered a witch. But persistent in her call she remained strong.

She was eventually expelled from the original monastery for being one her companions could not understand and so she turned to her Beloved  Jesus, who was to show her the way. Blessed Celeste’s heart was always focused on founding a new monastery and new way of life and so she continued her quest in Foggia, where she became a prolific writer and mystic.

The spiritual journey of Maria Celeste was filled with many mystical experiences and is characterised by obedience to conscience, by constant searching for the meaning of the gospel, and by living simply. Here where I invite to do your home work and read more of her life or just turn to her living followers today and let them tell you the whole of the story. Maria Celeste died at Foggia on the 14th September 1755. At the moment of her death, Saint Gerard Majella, her spiritual friend, declared he saw her soul flying to heaven as a white dove.” That’s quite a story of the one who followed the life of her redeemer.  I found that as I reflected more, it was fascinating for the situation here as she began with Carmelite roots but also had a tie to Francis as well.  In 1731, on October 3, the Vigil of the Feast of St. Francis of Assisi, Maria Celeste has a vision of Our Lord with St. Francis and Alphonsus Liguori. She discovers that Jesus wishes to have Alphonsus be the first superior of a men's Institute, with the additional charge to "…Go and preach to every creature that the kingdom of heaven is at hand."

Today we celebrate Celeste let us reflect upon the words of their own constitution: the Order of the Most Holy Redeemer accomplishes its mission in the Church in close fellowship with the entire Redemptorist family. The Order is, in fact, closely linked by its origins, name and 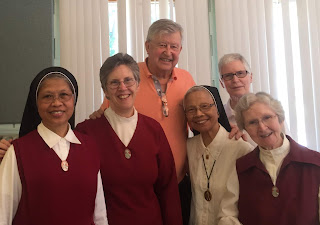 spirituality, with the Congregation of the Most Holy Redeemer. The twofold Institute is called to achieve a common goal in a complementary fashion. The apostolate of the Redemptorists is sustained by the contemplative life of the Nuns and their ministry gives incentive to the life of prayer and contemplation of the Nuns who are themselves fully missionary (cf. Canon 674), The mission of both is to be faithful witnesses of the love of the Father and to continue in this way with the grace of the Holy Spirit, the Mystery of Christ Jesus, born of the Virgin Mary for the salvation of mankind."

On this feast day may you remember always the vision of Celeste and live the words of St Paul in Ephesians, God has raised you up, In union with Christ to display the riches of God’s grace and kindness in Christ. May you echo Celeste vision in your life when he joins Paul in saying, “Life for me is Christ.


Posted by Redemptoristine Associates at 8:36 AM No comments:

THE GIFT AND JOY OF BEING AN ASSOCIATE

For the past 27 years I have had the gift and the joy of being an Associate of the Redemptoristine Sisters.  And even before I became an associate, I was coming to this monastery on Carmelite feast days in the late 1980’s.  And so both Orders of sisters have been my friends and spiritual support for many years.

The witness of all of the sisters in living a deeply committed contemplative life has been a major source of strength for me in my life as a contemplative in the world.

The fidelity of the Redemptoristine sisters in praying for my many intentions and needs of myself and my family gives me deep consolation.

The steadfastness of the sister’s presence to us together with the friendship with my sister associates is a source of strength and deep joy for me in the challenge to try to live the Gospel and be a Living Memorial of Christ the Redeemer in my daily life.

I feel deep gratitude to God, to each of the sisters and to my sister associates for this blessed association which has become such an integral part of my Christian life. 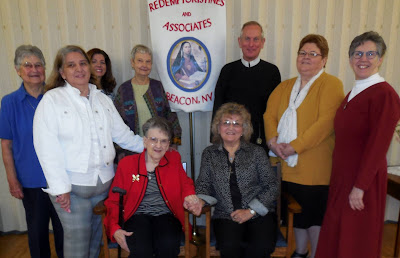 Posted by Redemptoristine Associates at 8:45 AM No comments: