In the Victorian language of flowers their meaning is faithfulness and longing for the beloved.  I imagine violets to be associated with MARY MAGDALENE.  She had been a faithful follower and supporter of the Lord ever since Jesus cast out from her seven demons.   Here is why I think of violets when I think of Mary Magdalene:

On the first day of the week, Mary of Magdala came to the tomb early in the morning, while it was still dark, and saw the stone removed from the tomb. So she ran and went to Simon Peter and to the other disciple whom Jesus loved, and told them, “They have taken the Lord from the tomb, and I don’t know where they put him.”  So Peter and the other disciple went out and came to the tomb.  They saw the burial cloths there, and the cloth that had covered his head.  They saw and believed, yet they did not yet understand the scripture that he had to rise from the dead.  Then the disciples returned home.  see John 20:1-10 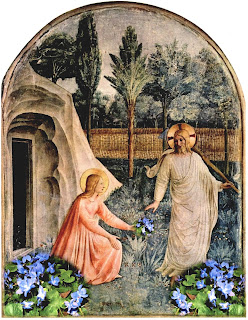 But Mary of Magdala slid down the side of the opening of the tomb and wept.  She found herself sitting among violets.  How faithful those little flowers were growing in the gravel in the garden of tombs.  Her eyes, bruised from sorrow and sleeplessness, matched their mournful color.  She reached out to caress a small cluster and picked but a handful to inhale their delicate scent which only a few can discern.  The fragrance calmed her beating heart.  Slowly, she put one small violet in her mouth.  The sweet flavor heartened her spirit.  With renewed strength, Mary raised her dark eyes, and with such longing in her heart, began searching the garden for the One she loved.  Nearby was a gardener.    She lifted her violet filled hand to him as she gently called out, “Please, if you have carried him away, where have you laid him?”    MKQ’19
Posted by Redemptoristine Associates at 11:32 AM