Fortunately, Celeste’s youngest sister feared something like this would happen and wrote to the family.   When Sr. Maria Celeste was expelled, her sisters Illuminata and Evangelista left with her. Opportunely, their brothers George, a Jesuit, and Michele arrived in time from Naples. Originally, they were denied access to their three sisters, but they prevailed and were finally permitted to escort them in borrowed Benedictine habits to a monastery on the Amalfi Coast where they could rest after the trauma.

While the sisters rested for ten days, another brother, Francesco, was searching for a place for Celeste and her sisters to discern where the Lord was leading them.  He found a Dominican convent in the Pagani region eager to offer them hospitality.  What was to be a three-month retreat turned into a two-year mission.    The local bishop was so impressed by the sisters, despite Falcoia’s attempt to discredit Celeste, ordered Sr. Celeste to take over as Superior, with Illuminata as Vicar, and reform the lax Dominican convent and to run their orphanage.  They were even given permission to wear their red and blue habits as they guided the community in the way of holiness.  Because of Mother Celeste’s great prudence and gentleness, the monastery was restored to perfect observance for the glory of God; the Dominican nuns were delighted with their ‘three angels from heaven.’ 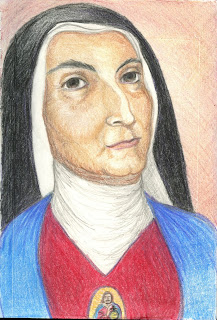 Though this was a time of consolation for Celeste, there was the matter of coming before the Inquisition at the request of the Bishop of Scala.  Her past was still haunting her.  Celeste and her two sisters underwent an interrogation individually and in great secrecy.  In the end, no charges were brought against them.

Celeste now truly longed to have her own monastery where she and her sisters could live the life of the Redeemer by following His Rule.   Eventually, Sr. Celeste received many offers to make a foundation. Not knowing which to choose, she asked the Lord’s desire.  At Communion came the answer.  "Go to Foggia.  It is there that I wish you to make the foundation.”

Things moved rather quickly then. In a month and a half, the foundation was arranged with the help of a benefactor, Canon Tortora, a house was rented, permissions obtained, travel arranged and by God’s grace, they gathered some girls to enter the new foundation.

The three-day journey was rain-soaked, with the carriages wheel’s getting clogged in the mud and stuck in the swollen river.  But Sr. Celeste was senseless to all this.  The Lord drew her into such ecstasy; she writes, “In this extraordinary recollection, God showed her an immense road, a way of thunder for humanity, on which traveled every created being.  And she herself was being carried along this Way to Heaven by the strength of the Spirit into the immensity of God’s Being.”

On March 9, 1738, Sr. Celeste and Illuminata, (their youngest sister decided to join a different convent), the six children, the Canon, the bishop and the whole town walked in solemn procession to the cathedral where there was a miraculous painting of Our Lady, so that they might offer themselves to God and place themselves under her special protection. Then they processed to their new home.

When everyone had left, Celeste, Illuminata, the 4 aspirants and two little girls looked around and saw only a table and a few benches, one pot to cook in and…. nothing else.   So, they got busy unpacking.  The two little girls were students who would live with the sisters.  By the grace of God and the goodness of their neighbors, “They had enough to live on, and the Lord never allowed them to want for anything in the way of food. And by means of the children's pension, they were able to furnish the house, which was a real miracle.”

The little community lived the Rule as best they could under the guidance of Mother Celeste.    Their only sadness was, because this was a rented house, the bishop would not allow them to have the Blessed Sacrament reserved in their tiny chapel.  This grieved Celeste and the sisters very much, “as without this sweet company they felt like bodies without the soul.”

After a year and a half, they moved to a proper monastery with a beautiful view of the countryside and a pretty little garden, with a Church and choir and all the necessary offices and rooms.  It really seemed as if the Lord Himself had chosen this monastery.  Here, on October 4th, 1739, they were able to reserve the Blessed Sacrament, and the foundation of the Most Holy Redeemer in Foggia truly began.

Mother Celeste, now 43, was finally settled and could spend the rest of her life in peace.  For the most part it was a peaceful existence because she always put her trust in God during good times and difficult times.

In the spring of the following year, there was an earthquake. Celeste ran to Chapel and begged before the Tabernacle for the earthquake to cease, for its punishment was hurting the good and the poor along with the bad.   Instantly, the ground stopped rocking.  Gratitude for this marvel turned to grief when it was discovered an uninhabited tower next door crashed into the room where two young girls were taking their siesta.  One child died, the niece of Canon Tortora.  The girl’s mother, was devasted.  Mother Celeste prayed with the woman, “For us, the Eternal Decrees of God are at once adorable and unfathomable.”

Other parents came wanting to take their girls home.  Mother Celeste, recognized in this the work of the devil, said to the parents, “You may take your children home as soon as you like, because the Lord has no need of people for His Glory, and will easily send souls whom He has chosen to be His Spouses.”

That may sound a little cold to our ears, but this is an example of Celeste’s heart of hope and complete abandonment to the Will of God.  In the end, all the children remained, and even more asked to enter the monastery.

At times, Celeste displayed the ability to read hearts: Once, sensing disorder in the community, Mother Celeste brought in a basket of beautiful large red apples to her daily ferverino (a prayerful reflection or teaching) to the community meeting.  She explained that each apple represented a sister and when there is discord in the monastery it spreads like the plague.  Then she had the sisters come forward and look at the apples.  All had blemishes, some more than others, one was totally rotten.  Not long after, a young sister left because she had no vocation.

Like St. Alphonsus, Bl Celeste was a prolific writer.  Yet, she had never formally learned how to write, so her spelling in her original Neapolitan dialect and lack of punctuation has challenged those translating her works.   In Foggia she wrote her Autobiography, the Grades of Prayer, her Advent meditations in honor of the Blessed Virgin Mary and more.  But primary among her writings is the Intent of the Father, the Plan of Love, which is the foundation of Celeste’s life and of the Order.  Here are the opening statements of the Plan of Love.

“With a desire have I desired to join My Spirit to the world and give it to every one of my creatures, so that I might live with them and in them until the end of the world.

“You must change your life into My Beloved Son’s life so that there might be in the world an authentic witness to those very salvific works which the Son performed out of love for humankind.  This is really possible because Christ is still a Wayfarer (a traveler) in those who are united to Him though love, and union with God through their faith, good works, and the grace of the Holy Spirit.’

Bl. Celeste’s spirituality can be summed up in two words: Viva Memoria.  As Redemptoristines we are called to be, in the Church and in the world, a Living Memory of the Redeemer.

Bl. Celeste was graced to have another friend among the Redemptorists:  Gerard Majella.  Though half her age, and young in religious life, Gerard became Celeste’s, and the community’s, spiritual director.  How did this happen?  Her dear friend Alphonsus Liguori sent Gerard, of course.

For his part, Gerard thought so highly of Mother Celeste and her community that he brought twelve young women to the monastery in Foggia ‘to become saints.’ 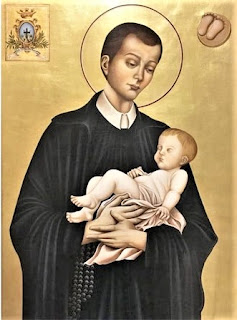 Gerard Majella.  Though half her age, and young in religious life, Gerard became Celeste’s, and the community’s, spiritual director.  How did this happen?  Her dear friend Alphonsus Liguori sent Gerard, of course.

For his part, Gerard thought so highly of Mother Celeste and her community that he brought twelve young women to the monastery in Foggia ‘to become saints.’

As the Will of God would have it, these two soul friends would die a month apart.  On the Feast of the Exaltation of the Cross, as St. Gerard lay on his own deathbed, he stated, "I have just seen the soul of Mother Maria Celeste wing its flight to heaven like a dove, to receive there the reward she has merited through her great love for Jesus and Mary.”

“It is finished.” John 19:30   Mother Maria Celeste took her last breath on September 14, 1755 at the end of the reading of St. John’s Passion.  How apropos for one who lived her life so closely to her Beloved, and Him crucified.

The next day, with all the bells ringing, her body was taken into the church for public viewing.  People came from all over to see the holy woman who had humbly lived the merciful love of the Redeemer.  Throughout her life, Celeste would often repeat what her Beloved had declared to her, “Tell them I am Pure Love.”  The townsfolk readily believed her message because of the holy Prioress’ example. They called her a saint. 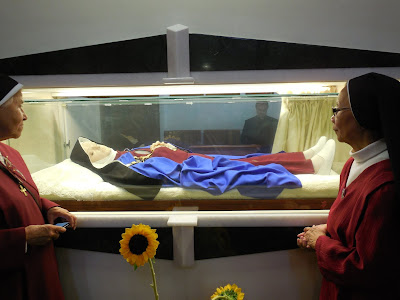 Fast forward to June 18, 2016.  I had the privilege to be in Foggia, Italy with other Redemptoristines from around the world for the beatification of Blessed Maria Celeste Crostarosa.  It was a marvelous occasion.

Among the people I met there was Sr. Maria Celeste Lagonigro, the present Prioress of Foggia, who was miraculously healed of a life-long painful ear disease on September 13, 1955, exactly 200 years after Bl. Celeste’s death.  The other person I met was Bl. Celeste’s great, great, great, (I don’t know how many greats) grandnephew Giovanni Crostarosa. 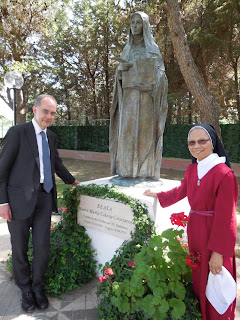 He told me that, to this day, Mother Celeste is just as famous in the Foggia region for her sanctity and writings as is St. Alphonsus.           We celebrate Blessed Maria Celeste Crostarosa on her designated feast day, Sept. 11.

Posted by Redemptoristine Associates at 8:15 AM